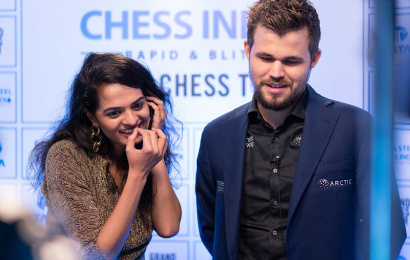 Six years to the day after winning the World Championship title in Chennai, Magnus Carlsen leads Hikaru Nakamura by a point after scoring 5/6 on the first day of the Tata Steel Chess India Rapid & Blitz in Kolkata. “Obviously I’ll take the result any day of the week and I think the games have been a lot of fun,” said Magnus after three Sicilians ended with wins over Ian Nepomniachtchi and Levon Aronian and a draw against Wesley So. Anish Giri and Vishy Anand were early leaders, but both lost in the final round of the day.

You can replay all the games from the Tata Steel Chess India Rapid & Blitz using the selector below:

And here’s the live commentary on Day 1 from Peter Svidler, Jennifer Shahade, Maurice Ashley (working the graveyard shift in St. Louis) and Tania Sachdev on site in Kolkata:

Let’s take the action one round at a time.

Round 1: Giri gets off to another fast start

Anish Giri started with 7/8 in the recent Superbet Rapid & Blitz in Bucharest before a run of 20 (yes, twenty!) games without a win saw him drop out of contention before finally finishing on 50%. He was also quick out of the blocks in Kolkata, where he scored the only win of the first round. Anish credited Vladimir Kramnik, who he seconded for the 2018 Candidates Tournament, with showing him the Catalan sideline that occurred in the game, but while the Dutchman was happy with the position he got out of the opening he was only looking to set up a fortress and draw until Ian Nepomniachtchi, with 19 minutes on his clock, made a fateful decision:

28.Bxa1! would be fine for White, but, surprisingly, 28.Qxa1? was the losing blunder! After 28…Qe6! it turns out White has no defence against the twin threats of pushing the e-pawn to the queening square and playing Qe4 to give mate on g2. Nepo gave up a piece with 29.Qf1 e3 30.Qxb5, but couldn’t stave off defeat. He got some counterplay, but as Anish explained, “when you’re converting way too slowly, at times allowing your opponent counter-chances is a good thing!”

In the other games Ding Liren seemed to miss a chance to put real pressure on Vishy Anand, while Magnus later admitted he’d “had to grovel for a draw” against Wesley So. If there’s going to be some measure of “revenge” for the painful defeat in the Fischer Random World Championship it’ll have to be later in the tournament.

Round 2: Anand and Carlsen join the lead

A warm-up for this tournament was held in Kolkata in 2018, and while not yet part of the Grand Chess Tour it followed almost exactly the same format. Back then Vishy Anand went a remarkable 12 games in front of his home fans without a win, 8 draws and a loss in rapid chess and then 2 draws and a loss in blitz. After that he hit back to tie for first place in the blitz and only lose out to Nakamura in tiebreaks, but this time round there was no need to wait so long. Vishy got a round of applause from the audience in the National Library of India after beating Wesley So in the second game of the day:

It was a tricky ending for Wesley, but defending the e5-pawn pawn with 57…Nc6 or 57…Nf7 here probably still holds. In any case, after 57…Ne6? 58.Bxe5 Kxh6 the 7-piece tablebases tell us White is mathematically winning. The conversion went smoothly for the 15th World Champion, and the commentators in the St. Louis studio were teasing Tania for not having patriotically chosen Vishy as her pick for winning the tournament:

As she explained when they gave her the chance, however, the point was that Vishy doesn’t need to win the event to qualify for London, and there’s a good chance he’ll play pragmatically to get the number of points he needs.

The applause for Vishy didn’t disturb the other players, since those matches had already ended, with the one other decisive result coming for Magnus Carlsen. He later commented:

Obviously the game with Ian was fairly clean, but that’s what happens when you’re basically lost out of the opening, as he was.

…and the final position was one of utter domination:

Among the three draws Vidit-Nakamura stood out, with both players missing serious chances to win the game.

Round 3: Everything goes Carlsen’s way

It’s fitting that Magnus is back in India on the 22nd November, since this marks the 6th anniversary of his defeating Vishy Anand 6.5:3.5 to claim the World Championship title for the first time. The Carlsen era begins, we wrote about the 22-year-old’s victory (while chess24 was still in beta). Some images from back then are hard to forget!

Everything that could go his way did in the final round. Co-leader Vishy Anand is still near the top of the game, but it was a game to forget as Ian Nepomniachtchi woke up after two losses to win the opening battle and launch a decisive attack on move 18!

18.Nh6+! wasn’t the only winning move, but was definitely the most picturesque, especially as it was followed up by 18…Kh8 19.Rxf6!

Carlsen’s other co-leader, Anish Giri, didn’t go down in flames, but when he left known theory he soon himself in a tough ending. Hikaru Nakamura commented that after that it was “surprisingly easy” as “Anish just let me walk my king right into d5”:

Giri resigned when he was about to be two pawns down in a rook ending.

Magnus Carlsen took full advantage of those slip-ups as he beat Levon Aronian, though it wasn’t the smoothest of wins! When Tania Sachdev asked him if he’d been in full control he responded:

No, I thought after the opening I was probably lost!

Instead, though, Levon chose 26.Rc3!? 26.Rbc8 27.Rxc7, with Magnus pointing that out as the moment the game swung in his favour:

I was very surprised. I thought it might be one of the ideas of going 25.Rd3 first, but I felt that in general exchanging rooks was so bad for him that he wouldn’t do it. Probably here he was already a bit stuck – it looks extremely nice for White and I don’t have an attack, he does, but he couldn’t really find a way, and when you cannot find a plan you often go for a bad plan.

Magnus, who himself had had a knight on a5 in the previous game, was here able to turn the tables with 32…Bd8!, hitting that knight on the rim, and when the knight fled to c6 the bishop revealed a sting in the tail:

34…Bxg5! 35.Qxg5 Qf1+ 36.Kc2 Bc4! and though Magnus was disappointed not to have an immediate killer blow after 37.Qe3 he nevertheless went on to win the ending with his usual impressive technique:

We have to highlight that one mishap, however! Magnus played 48…Rg7?, both retreating the rook and covering the c7-square:

The fly in the ointment?

49.Nf4+! would have won the deadly h-pawn, since Black can’t of course capture the knight without losing the rook on g7. Magnus:

Yeah, that was quite embarrassing! I saw it right after I made my move. I instinctively made the move 48…Rg7? to avoid Nc7, but obviously just after something like 48…Rg8! I’m well in control here. But here I was thinking Nf4 and I was not looking forward to actually having to fight a little bit for a draw!

Instead he went on to win smoothly in 68 moves.

The real blunder of the last round of the day, however, involved Ding Liren. The Chinese star had been surprisingly shaky, missing chances in the first two rounds, but after Vidit confessed he “played like a complete patzer in the opening” Ding got an easily won position with two connected passed pawns:

“What am I supposed to say? This is ridiculous!” commented Hikaru Nakamura, adding, “Ding should win this game 100 out of 100 times.” Hikaru’s main communication had been non-verbal, with Peter Svidler summarising, “I just want to say I endorse every single one of those facial expressions when you talk about this rook endgame!”

First of all I would like to say that Hikaru seemed more upset than Ding himself. Ding at least smiled at me after the game, but Hikaru couldn’t believe it at all.

He was asked why he kept playing:

I was just playing out of inertia. I was just upset and I didn’t want to resign. I didn’t expect it to happen, but I’m happy that it did, and to all the Ding fans who must be upset I would just say that in the World Cup before his 100-game streak I drew against him like a +6 position!

A good day for Vidit in the end!

That left the standings after Day 1 as follows:

Day 2 gets off to the perfect start as it’s Carlsen-Nakamura, which would be a highly anticipated game even if the players weren’t currently in 1st and 2nd place in the tournament. Follow all the action from 9:30 CET LIVE here on chess24 with commentary in English and Russian!