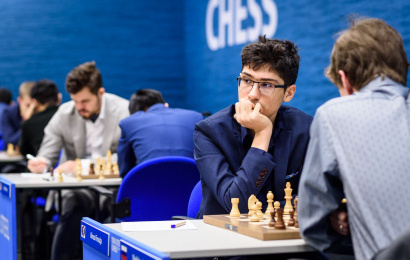 16-year-old Alireza Firouzja is the sole leader of the 2020 Tata Steel Masters on 2.5/3 after easing to victory over Vladislav Artemiev in Round 3. Fabiano Caruana picked up his first win by defeating Yu Yangyi, while Jorden van Foreest made it two Sicilian Alapins, two wins by defeating Daniil Dubov. Magnus Carlsen lived dangerously but with a draw against Jeffery Xiong has now matched the 110-game unbeaten streak of Sergei Tiviakov. He can set a new record tomorrow when he plays Jorden with Black. MORE LATER!

You can replay all the games and check out the pairings from the Tata Steel Masters using the selector below:

And here’s the day’s live commentary from Peter Svidler and Jan Gustafsson:

After Round 3 the standings look as follows, with Alireza Firouzja out in front:

Meanwhile it was a much quieter day in the Challengers:

Come back later for player quotes, interviews and analysis!