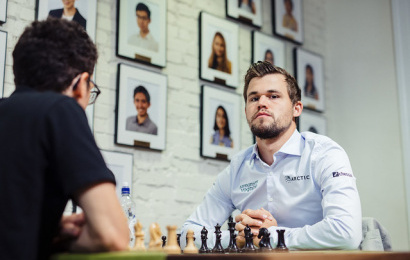 Magnus Carlsen lost to both Fabiano Caruana and Levon Aronian as he made uncharacteristic blunders on Day 2 of the St. Louis Rapid and Blitz. Levon, who still leads and is now a whopping five points clear of Magnus, said the World Champion’s losses were a “sign that maybe it won’t go as smooth for the rest of the year for him”. MVL confessed he’d been “just as lucky as Levon” to win all three games on Day 2 and move within a point of the leader.

You can replay all the games from the 2019 St. Louis Rapid and Blitz using the selector below:

And here’s the live commentary on Day 2:

There are two special chess24 offers during the event. Go to the Premium page and enter the voucher codes:

A bad day at the office for Magnus Carlsen

Although Magnus had been outplayed by Ding Liren in the first game of the St. Louis Rapid & Blitz, wins over Richard Rapport and Leinier Dominguez had quickly quashed any suggestion of a crisis and left the World Champion in 2nd place and perfectly poised to hit back. Day 2, however, really did go almost as badly as it could have done for Magnus.

First up there was the most eagerly-awaited clash in chess nowadays, Caruana-Carlsen. Until Fabi’s 6.b3 (not 6.h4) it was following Carlsen’s 23-move crush of Anish Giri in Zagreb recently, but although Magnus played just as boldly as in that game this time his aggression backfired. When putting his knight on e6 he’d overlooked that it was cutting off any retreat for his g4-bishop, allowing a tactical shot:

I basically thought I’m winning with Nxe5. I already expected kind of a wipe-out, when I saw that move and f3, and his structure is crumbling.

Magnus dug in, however, and until move 26 he had real hopes of surviving:

Fabiano said he’d overlooked that after 26…Rxe4! 27.h6 Black can close the long diagonal with 27…Nd4!, but instead Magnus went for what Fabi called the “horrible move” 26…c4?, after which 27.h6! was winning.

Magnus postponed the end of the game with mating threats, but after some careful play Fabi followed a sequence of exchanges with the elegant 39.Rh6!

The black king and rook can’t move so the white king has total freedom to enter and decide the game. Magnus had seen enough:

Although Fabiano had already beaten Magnus in Armageddon in their mini-match in Norway this year, this game was further vindication of the US star’s rapid skills. He started the day as the rapid world no. 4 and ended it at no. 3, but he’s still under the shadow of losing 3:0 to Magnus in London in the World Championship tiebreaks. When Maurice Ashley brought up that topic Fabi responded:

These are slightly different circumstances! But regardless of where the win is, a win against Magnus is quite special.

There was no looking back for Fabi, who survived a very tricky game against Dominguez and then won a game that could have gone any way against Rapport. He summed up:

The day went perfectly – I had two Blacks, it was a day when I was facing Magnus, and I scored 2.5/3, so I couldn’t have hoped for more.

Magnus, meanwhile, went on to suffer a second loss in a row, something that hadn’t happened to him since the start of the 2018 World Rapid Championship, when his unlikely conquerors were Adam Tukhaev and Shamsiddin Vokhidin. This time at least the opposition was of a calibre even the World Champion couldn’t be too ashamed to lose to – with 2017 St. Louis Rapid and Blitz winner Levon Aronian up next.

What Magnus might be ashamed about was the manner of the loss, since it came with White after bold play had seen him build up a substantial edge. It was perhaps naïve, however (and this isn’t something we get to say often about Carlsen!), to assume that Levon was just lost after 20.Bh7+!? Kh8 21.Nh4?

Magnus instead went for 24.Qxe4+ dxe4 25.Nxc8 Bxc8, but to have any chance playing with a rook against two minor pieces he would have had to play the rest of the game must better than he did. Resignation came on move 35.

Aronian was in great form in the interview after that game, explaining how he’d played badly in the opening but had snatched his chance:

I saw this cheapo. Whenever I see the cheapo in a position I sit there and pray! (…) You have to mix bad moves and good moves, that’s what Larsen said, and I manage to do it perfectly! I guess that’s my secret.

Of course Magnus is a very strong rapid player… and blitz… and chess, everything! But you can’t always maintain the form the whole year long, and he was doing it perfectly and now this is not the end of the world, because he can still win the tournament, but this is the sign that maybe it won’t go as smooth for the rest of the year for him. But what do I know? We’ll see!

Aronian’s other two games, where he offered Ding Liren a draw in a better position while down on time and had to suffer for 70 moves against Dominguez’s Berlin, were nothing to write home about (“my play is not good – I’m happy but not very happy”), but sufficient to retain the sole lead.

The day could have got even worse for Magnus, as his Pirc Defence against Yu Yangyi gave him a passive, unpleasant position, but there was some light at the end of the tunnel as he was briefly even slightly better before the game ended in a 69-move draw.

Maxime goes on a streak

The top performer of the 2nd day was Maxime Vachier-Lagrave, who followed his stunning queen sacrifice victory at the end of Day 1 with another three wins in a row on Monday. He described himself as, “both very happy and just as lucky as Levon”, with the luck coming in the first two games of the day. First Karjakin “collapsed completely” in a position that Maxime said was just a “dead draw”, while “a pretty good game” against Shakhriyar Mamedyarov was nevertheless lost for Maxime at one point:

52.Ke1! and Black could resign. The threat is Ra8+ and Rh8#, while pushing the f-pawn to stop the mate loses to Bc4+, picking up the b3-rook. The computer evaluates that as almost +10 for White, while after 52.Ke3?, self-pinning the d3-bishop, the evaluation had swung to -8 in Black’s favour. 52…f5! could now be played with impunity and Maxime went on to push the a-pawn and win in a few more moves.

It was a tough day for Mamedyarov, who ended with four losses in a row after also blundering one-move tactical shots against Yu Yangyi and Sergey Karjakin. For Maxime, meanwhile, an impressive grind against Ding Liren made it four wins in a row.

That left Maxime in sole second place behind Levon with one day of rapid chess and two of blitz to go:

Up next for the French no. 1? Black vs. Magnus Carlsen! At stake will be not only whether the World Champion can mount a comeback before the blitz, but the no. 1 spot on the rapid live rating list: