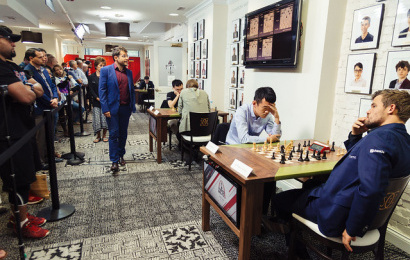 Ding Liren scored his first ever win with White over Magnus Carlsen in any time control to start the St. Louis Rapid and Blitz with a bang, but Magnus hit back to beat wild cards Richard Rapport and Leinier Dominguez in the following rounds. That left him trailing two points behind leader Levon Aronian, who picked up a perfect three wins, but the Game of the Day featured Maxime Vachier-Lagrave sacrificing his queen for two minor pieces to beat Rapport.

You can replay all the games from the 2019 St. Louis Rapid and Blitz using the selector below – click a result to open the game with computer analysis, or hover over a player’s name to see all his games so far:

And here’s the live commentary on Day 1:

There are two special chess24 offers during the event. Go to the Premium page and enter the voucher codes:

Just a day earlier, referring to his loss to Magnus in the Croatia Grand Chess Tour in Zagreb, Ding Liren had commented on how he could stop the World Champion:

First I have to survive my own game against him – last time I lost to him with the white pieces, so I have to do better – and then it’s none of my business!

The universe decided to pair him with White against Carlsen in Round 1 in St. Louis, and for a moment in the opening he had the chance to seize a big advantage:

Instead, after Ding spent a tempo on 13.Qb3, it was Magnus who soon had a small advantage, but that would all change:

This year the story has all been about Magnus attacking on the kingside while his opponents are busy building up edges on the queenside, but this time we ended up with the reverse situation. Carlsen’s pieces are all clumped together on the queenside while Ding is ready to attack. He commented afterwards:

Maybe he missed my plan 20.Qg4 and 21.Bf4 and I have very good attacking chances on the kingside. When I found the plan Rd1-d3 and maybe Rg3, he’s under pressure.

Liren skilfully combined attacking on the kingside with pushing his c-pawn, until after 42…Qxh5 he was ready to deliver the final blow:

It was a memorable result for Ding:

At the opening ceremony Magnus had noted, “I think once I start playing poorly again people will smell blood, so it won’t be easy”. Was this going to be the start of a collapse?

No, is the short answer! Up next was Richard Rapport, and although the Hungarian kept a healthy edge on the clock he dropped a pawn for nothing and was put to the sword when he tried to give the impression he had compensation:

White’s threat is Qxe7+, but by this stage Magnus would be winning even after a prosaic defence like 35…Qe8. Instead he finished in style with 35…Qxc7!. Rapport resigned since after 36.Qxc7 he’s not even up material, while preventing mate after 36…Ne4 would cost him dearly.

The final player to feel Carlsen’s wrath was another wildcard, Leinier Dominguez, who was caught unprepared by some AlphaZero style aggression – push the h-pawn and throw pieces at the enemy king!

Or as Garry put it:

10…f5?! wasn’t the best response, but the main issue with the move was the 10 minutes Leinier spent on it. He later had some chances in the complications, but with no time to calculate he sank without a trace. Magnus couldn’t be too disappointed with the outcome of his day’s work:

It was pretty bad, so I’m happy to have come out of it as well as I did, but anybody could see that this was far from my best day.

Aronian rises to the challenge

The player to take advantage of the World Champion’s opening round stumble was Levon Aronian, who first went for an eccentric knight retreat in the opening against Maxime Vachier-Lagrave:

And then he pulled off the trick of winning from this seemingly boxed-in position:

Jan and Artur have previously tackled a similar topic!

Then Levon showed some more endgame sorcery against Sergey Karjakin in a game which for the first 12 moves followed perhaps the most memorable game of the last three years: Karjakin’s victory over Carlsen in Game 8 to take the lead in the 2016 World Championship match in New York. This time it looked as though it should be well within the drawing margin for the Minister of Defence, but 32.Rg6! left Sergey with only tough choices:

“It was generally a decent game,” was Levon’s summary of how he ground out a win from there, but he wasn’t getting carried away afterwards. How did Magnus losing the first game help him?

It’s going to be exciting, because he will eventually strike back, as he already did, so at least I hope to have a chase.

For the moment Levon is chasing from the front since he also went on to win the last round of the day after springing a novelty on Shakhriyar Mamedyarov on move 17. It refuted Ben Finegold’s “never play f6”:

This is something I analysed, this f6-idea, I would say Rybka era, way back, so it’s kind of a tricky position to play, especially in rapid, because Black has so many plans and it’s a complex position and my opponent didn’t know it. I thought I was more or less in control, because once I brought my knight to d6 it looks really bad for White.

Mamedyarov spent almost 20 minutes on his next five moves and couldn’t resist the relentless pressure Aronian applied in the endgame.

Both Maurice Ashley and Yasser Seirawan asked if the new chess tables in the St. Louis Chess Club were inspiring the players, and Levon didn’t disappoint with his answer:

I think it’s the green colour, it’s making people creative… Generally I think people like to see some change, and here we see this really beautiful table, so I think that’s something you look forward to going back to the board.

It wasn’t just about the leaders, though, as we got to witness some more stunning moves:

Maxime Vachier-Lagrave seemed to come into St. Louis with a hangover from his tough final two days in Paris. First he lost an endgame he should never have lost to Levon, then he was forced to grovel for a draw in a 4 vs. 5 rook endgame against Yu Yangyi, and then, as he later admitted to Almira Skripchenko (who interviewed him in French on the Russian channel), he blundered Richard Rapport’s strong 24…Qh7!. He sank into a 7-minute think and came up with a plan which culminated in the position after 27…Bd7:

Black has sacrificed a piece for this tactical shot, so if Maxime simply played 28.Qd6+ Bc7 29.Qb4 and let Rapport take on h3 the position would still be more or less equal. The French no. 1 had a vastly more interesting conception in mind, however, and went for 28.Qxd7!??!

White has only two minor pieces for the queen, but a couple of inaccuracies were all it took for White to take over. Levon half-joked:

Yes, beautiful game, I’m proud of him! You can see that he learned this from bughouse, that advanced pawns are a threat.

Magnus Carlsen was in the studio after 42.Rdc1 was played:

His sense of chess harmony was triggered:

It’s really quite a remarkable position in the sense that before Rxc7 it was really a picture of perfect coordination, nothing short of it, every piece has its function, no superfluous pieces whatsoever, all of the pieces except for the queen on the board, working together, just beautiful!

After 42…Qxd4 43.Rxc7 Maxime went on to score a majestic victory, though it wasn’t flawless. He also admitted to Almira that he’d missed Rapport’s later 46…Qh5, and that his 47.Nf5? would have thrown away the win if Richard had replied 47…Nd7! Still, that’s only a detail, and this is a game that deserves its own small place in chess history.

Ding-Liren vs. Caruana, meanwhile, was perhaps not an incredible game, but it featured a sumptuous move:

White has ignored the b3-rook’s attack on his queen and picked up a piece on d5 while also attacking the black queen. Game over? Not quite, as Fabi unleashed the wonderful only move 31…Qa3!! Now 32.Rxa3 would be met by 32…e1=Q+, while after 32.Qxe6 Qxa1+ 33.Kh2 Caruana stopped mate with 33…Rb6! and White soon had nothing better than to force a draw by perpetual check. Yasser was impressed!

That draw meant that Ding Liren could only match Magnus on 4/6, two points behind Levon:

The action continues with three more rounds on Sunday, with the pairings in the day’s first rounds close to perfection. It’s Caruana-Carlsen and Aronian-Ding Liren in Round 4 followed by the potentially crucial showdown Carlsen-Aronian in Round 5. Tune in to all the action from 13:00 CDT, 20:00 CEST here on chess24!