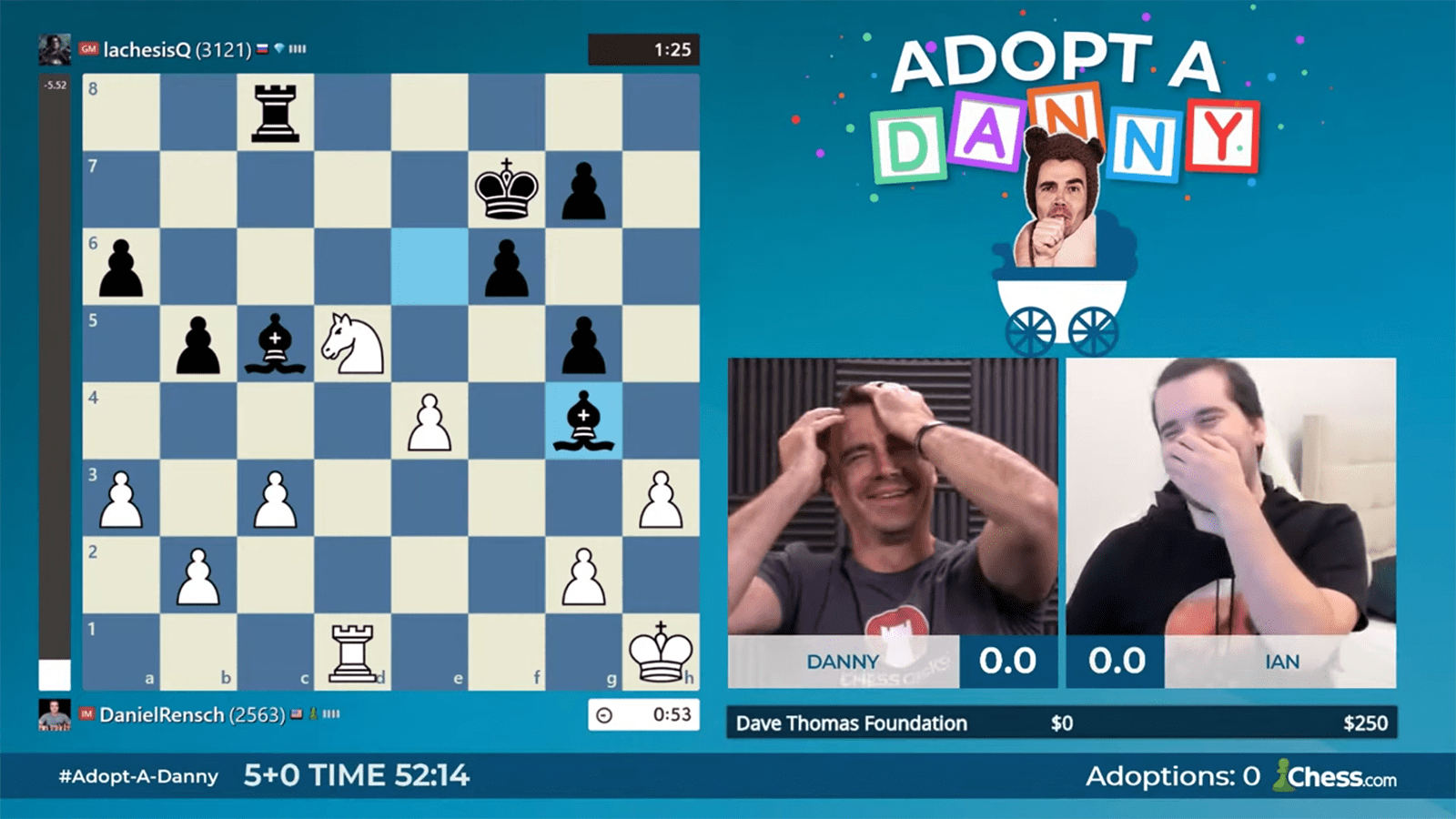 On Wednesday, GM Ian Nepomniachtchi and IM Danny Rensch teamed up for the fourth installment of the “Adopt-a-Danny” series—a special event to help raise awareness for adoption, contributing all donated proceeds to the Dave Thomas Foundation for Adoption.

It had to happen one day, and it was world number-four Nepomniachtchi who managed to do so: “adopting” (meaning, scoring 10-0) Danny in all three time-controls. With Nepo donating half of his earnings, that was a bad thing for Rensch, but a good thing for the Dave Thomas Foundation.

Here is the entire broadcast of the show:

The five-minute segment started with one of the funniest moments of the whole show, with Rensch walking into a self checkmate along the h-file:

The 30-0 sweep was one hell of an adoption, but of course, Rensch had chances to draw or win games, here and there. The final game in the three-minute segment was especially painful as he was a piece up when he flagged:

Four games before the end of the bullet segment, Rensch asked if Nepomniachitchi wanted to play the remainder on his phone. As it turned out, the Russian GM was more than comfortable and just as fast, if not faster.

The community contributed $262.55 during the live broadcast, and Nepomniachtchi graciously donated half of his earnings ($300 per adoption) for an amount of $450, so the total amount raised for the foundation was $712.55.

Below is a video with more information about the Dave Thomas Foundation for Adoption, the only public nonprofit charity in the United States that is focused exclusively on foster-care adoption.

This Adopt-A-Danny was the fourth of its kind after GM Anish Giri adopted Rensch in the bullet portion recently. GM Wesley So adopted Rensch in both the 5+1 and 1+1 segments last month, and GM Maxime Vachier-Lagrave had signed the adoption papers in the first edition of the series.

Each time, Rensch is looking to avoid “adoption” (losing in 10 consecutive games) against strong grandmasters across three different blitz and bullet time controls. Ongoing adoption streaks can only be ended with a Rensch win or draw. He cannot be saved by the time running out in the segment.