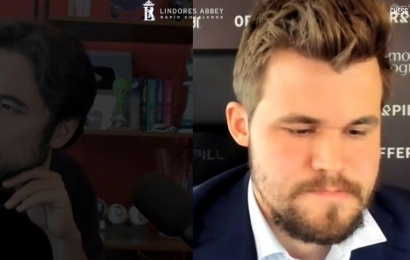 World Chess Champion Magnus Carlsen scored a 3:0 clean sweep against Hikaru Nakamura on Day 1 of the Lindores Abbey Rapid Challenge Semifinals. The other clash was much tighter, with Daniil Dubov and Ding Liren trading wins before Armageddon seemed inevitable. Suddenly, however, Dubov found a way to win the final game. That leaves Ding Liren and Nakamura needing to win on Friday to prolong the matches.

You can replay all the games from the Lindores Abbey Rapid Challenge knockout using the selector below:

Day 1 of the semi-finals saw mini-match wins for Magnus Carlsen and Daniil Dubov, but they were very different wins:

You can replay the whole day’s live commentary from Peter Svidler, Jan Gustafsson and Lawrence Trent, with a cameo appearance by Peter Heine Nielsen, below:

And for a recap of the day’s action here’s Pascal Charbonneau’s Aftershow:

This was the match everyone was waiting for in the Lindores Abbey Rapid Challenge – a repeat of the final of the Magnus Carlsen Invitational. In that earlier event Magnus had won two 4-game matches against Hikaru, but on each occasion the US star had also drawn blood. Before their latest clash he fired off a tweet:

It was a lot of fun to speculate, but there wasn’t much time as the first game soon heated up. Magnus played the Scotch and then on move 9 sprung a surprise, castling long:

The move had been played just once before, at this year’s Gibraltar Masters, by Maksim Chigaev. The Russian grandmaster helped the move to keep a low profile, however, since his Chinese IM opponent Chen Qi spent 12 minutes, played the unambitious 9…Qe7, got a bad position… but then went on to win anyway! The obvious question is what happens if you grab a pawn with 9…Bxc3 10.bxc3 Qxc3 11.Bd4 Qxf3 12.gxf3 f6, but the answer seems to be you find yourself under real pressure after 13.Rg1.

Hikaru spent almost 6 minutes before opting for a similar “pragmatic” choice with 9…Qxf3, but that just played into Magnus’ hands. The World Champion commented:

I’ve got to say it worked out pretty well. I got a lovely position from the opening. I guess then the only question was how do you win it, and I really struggled to see it.

You can watch his full post-match interview below:

Magnus had seen the outlines of what happened in the game on move 26:

White has totally shut down the black queenside and here he decided to go for the radical option of 26.Bxe7!?, explaining:

I wasn’t sure that it was winning at all, but I did feel that the race we would get in the game would be in favour of me, and that’s basically what happened.

29…b6 made Carlsen’s live easy, but it was only easy if you could see the fantastic resource after 30…cxb6 at a glance:

If most of us played 31.Bxa6!! it would be a blunder, and we’d only realise after 31…b5 that the bishop is trapped and will be gobbled up by the black king.

Magnus, however, had seen that in the time that would take he should be able to take the h4-pawn and invade with his king. The passed pawns would do the rest in what became a quite beautiful game!

Hikaru Nakamura had lost both matches he played against Magnus in the Magnus Carlsen Invitational, but he’d won three games with the white pieces, so he had every reason to feel that he could inflict damage in the second game of the day. At some point, in a 4.d3 Anti-Berlin, he seemed to be well on top, but Magnus was also at the top of his game and spotted 19…b6! at just the moment when Hikaru must have felt he was ready to begin targeting the black king:

The point is that 20.Nxc6 is met by 20…Qd7! 21.b5 a6 22.c4 axb5 and suddenly it turns out that the a3-pawn is falling and the white king is dangerously exposed. Hikaru instead went for 20.Nc4 and was soon being driven back, but Magnus admitted he’d missed something:

He called it “pretty embarrassing” that he hadn’t noticed that after 28.Rdc1 White would threaten Nd6 next, though in fact, as he then realised, after 28…Ne6! 29.Nd6 he could give up his queen with 29…cxd6! and still be much better! Everything was going his way.

In the game Hikaru played 28.Nf3 and a few moves later Black had complete control until resignation came on move 41. Magnus had an almost unassailable 2:0 lead and could afford to have some fun by tweeting a Twitch emote that Hikaru’s fans use when Magnus is mentioned on his channel:

Peter Svidler was on hand to offer a partial explanation:

In Game 3 Hikaru Nakamura needed to win with the black pieces, and went for an offbeat system:

Magnus said he spent “oceans of time” and felt his opponent did a decent job of trying to win the game, but it came to nothing.

I felt like he played very well for a while and he was definitely in it, but it was kind of hard to prevent some tactical shot at some point… There were ways he could play for a draw but never anything more.

Magnus had started with a perfect 3:0 score, but in the end it’s the win rather than the scoreline that matters. Hikaru still has a route to the final, but he’ll now have to win on demand on Friday to force a deciding match on Saturday. Magnus returned the favour in wishing him luck!

Daniil had spent so long the day before explaining why his provocative approach doesn’t work against Chinese players that we might have expected him to take an altogether quieter approach, but he couldn’t resist playing 13.Ra5! in the very first game of the day:

“This Ra5 looks very stylish and yesterday Karjakin played the same way against me, so I was sort of inspired by him,” said Dubov, though he also felt it shouldn’t work. He noted that after 13…b6 14.Nc6 (just retreating the rook is better) Black has 14…Bg4! and…

White pretty much resigns, which would be a typical game that I lose to Ding or another Chinese player. Ra5, you try to be creative, and you resign two moves later!

In fact White has 15.Qxg4! there, and the game goes on, but Ding instead chose 13…g5!? and just a few moves later, without Daniil even playing all the best moves, he’d won the game!

Ding is the favourite for the match and looked like it in the next game, when he got an edge in the opening and smoothly converted in 39 moves. Daniil would later say that he wasn’t too upset by that, since, “I didn’t feel like I played like a complete idiot” and there was nothing shameful about getting beaten by the world no. 3 in a game where you can’t even pinpoint exactly where you went wrong.

He then felt the 3rd game was a turning point, since he was able to outplay Ding technically before the game ended in stalemate on move 52. It’s also worth pointing out that was the first time in 14 knockout games in the Lindores Abbey Rapid Challenge that Daniil had made a draw!

In Game 4 there was more inspired opening play from Dubov, who got to play a move that he justified for other reasons before adding, “also it looks nice!” – 15…d3!

Black went on to win a pawn, but Dubov admitted that he might have offered a draw if he hadn’t felt it’s “a little bit ridiculous” to offer one when you’re a pawn up. We were heading for Ding Liren’s 3rd Armageddon game of the tournament, but suddenly Ding had allowed the black king to invade and a black rook to get behind the passed b-pawn. A race began on both sides of the board, but Dubov was just in time and went on to seal victory!

Daniil called himself, “kind of lucky,” and Jan asked him about the system in place for the event:

How do you like this format? You win the match and the match is not over. It’s just one point out of the two you need. Is that annoying?

No, I think it’s brilliant! It increases the chances of the player who’s better in general.

Ding already showed against Yu Yangyi that he can come back to win a match, and if he’s going to reach the final he’ll have to do it again. The same of course applies to Hikaru Nakamura.

So the stakes are even higher on Friday for the 2nd matches of the semi-finals – you don’t want to miss this! Tune into the Lindores Abbey Rapid Challenge from 15:30 CEST right here on chess24.