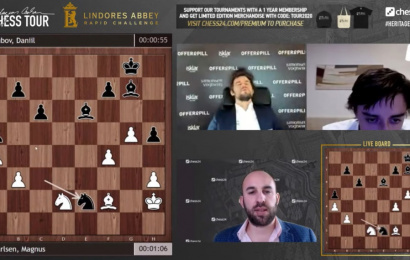 Alexander Grischuk, Alireza Firouzja, Jan-Krzysztof Duda and Wei Yi have all been knocked out of the Lindores Abbey Rapid Challenge after a dramatic last day of the preliminary stage saw World Champion Magnus Carlsen also on the brink of an exit. Magnus lost to Daniil Dubov and would have been knocked out if he’d lost with Black to Firouzja in the final round, but there was no Banter Blitz Cup final repeat – he won in style to reach a 1/4-final against Wesley So. Hikaru Nakamura finished top and faces Levon Aronian.

You can replay all the games from the preliminary stages of the Lindores Abbey Rapid Challenge using the selector below:

For an overview of the day’s action don’t miss the Aftershow with 2-time Canadian Champion Pascal Charbonneau:

Round 9: A tense start

Thursday’s final day of the preliminary stage was where things got serious. With just three rounds to go 10 of the players were still unsure if they’d survive. The only players who could feel secure were leaders Hikaru Nakamura and Sergey Karjakin, with Sergey perhaps exploiting that situation to have some fun by playing the hyper-aggressive Keres Attack against Magnus. He got pressure that lasted long into the endgame, but eventually Magnus held.

The players who found themselves in the drop zone were also the youngest in the event, Wei Yi, Jan-Krzysztof Duda, Daniil Dubov and Alireza Firouzja, but none of them managed to pick up wins. Wei Yi was held by Hikaru, while Duda went down in flames against Ding Liren:

The black knights have taken up residence in Duda’s camp and all that was needed was one last nudge to send the whole edifice crashing down: 25…h5! 26.axb6 axb6 27.Ba3 hxg4 and Duda resigned. Rh6 and Rxh2 will be mate or thereabouts if White tries to play on.

That was a huge blow to Duda’s chances while Alireza Firouzja missed an opportunity to grab a vital win when he couldn’t finish off Daniil Dubov, despite our commentators already chalking up a full point to the Iranian.

Round 10: All or nothing

As fate would have it, the four youngsters, all still in the drop zone, had Black in the next round and now really did need to win at all costs, which perhaps made it less of a surprise that all of the games finished decisively! The tournament was over for Wei Yi, who lost to Yu Yangyi, and Duda, whose struggles against Nakamura continued:

Hikaru’s win would prove enough for him to finish the preliminaries in sole first place.

The other strugglers did manage to win on demand, however, with Firouzja taking down Grischuk in classical style with the King’s Indian Defence. As we’ll see, that loss would seal Grischuk’s fate, while the other game was even more dramatic.

Daniil Dubov once again stayed true to his Philidor (1.e4 e5 2.Nf3 d6!?) despite facing his “boss”, Magnus Carlsen. He managed to create just the right amount of chaos on the board and when he got to play the d5-break he was better, but ironically Magnus collapsed just when he had the best position he’d seen in a long time:

41.Ng3 and White is back in business, but Magnus blundered with 41.Bf2??, simply dropping the knight on e2. For the second time in a week, Magnus had to congratulate his second for a well-played game. How was he feeling?

I was so pissed. It was a very good performance by Daniil. I lost quite deservedly, but playing so poorly for so many games in a row tilted me pretty heavily at that point.

That meant we got a scenario that had seemed all but inconceivable on the first day of the event. World Champion Magnus Carlsen was in real danger of finishing in the bottom four and leaving the tournament early.

Round 11: No Banter Blitz Cup repeat

It was far from ideal that Magnus, who had struggled with the black pieces, found himself playing Black in the final round against none other than Alireza Firouzja, the hyper-motivated and dangerous 16-year-old who had beaten him in the Banter Blitz Cup final. A win for Alireza would see him leapfrog Magnus, and the position that arose on the board was one where one mistake could be fatal. Magnus commented:

It was kind of a difficult position to play because I feel like I’m slightly better most of the way, but it’s the sort of position where you cannot force a draw.

It was only on move 30 that Magnus could breathe a sigh of relief when his opponent exchanged on d4 and c4, since he’d seen a big move:

33…Rb3!! transformed the position, and had our commentators drooling. When Jan suggested it, Peter described it as “beautiful”, “stunning” and “gorgeous” in the space of a couple of sentences. It’s fair to say they were fans:

I was thrilled to see this 30.Bxd4 and 31.Nxc4 because I knew I would have Rb3 later on and then, first of all, it looks pretty good and I at the very least get a serious initiative. Secondly, the game is forced, so I don’t have to wonder about moving around anymore. The game is pretty much going to be decided very soon and that was very good for my mood.

That ensured safety for Magnus and ended Firouzja’s tournament, but who else would be knocked out was still unclear. Yu Yangyi ensured he avoided the dangerous tie on 50% by drawing against Duda, though spotting 38…Nf5!! deserved to lead to a win:

Alexander Grischuk beat Wei Yi on demand with the black pieces, but when Dubov and Aronian drew that meant that all three players ended on 5.5/11. That was bad news for Grischuk, who had scored just 0.5/2 in the games against those rivals, while Aronian had 1 and Dubov 1.5. Alexander’s blunder in a drawn position against Dubov the day before had proven even more costly than it seemed at the time. That le,ft the final standings as follows:

“I pulled through, so I shouldn’t complain, and now, obviously, we all start from scratch”, said Magnus, who will play the famously tough to beat Wesley So in the quarterfinals. After winning the first two games, Wesley drew all the rest except for one game against Dubov where he blundered on move 10.

Hikaru’s reward for finishing top is to face Armenian no. 1 Levon Aronian, while on the other side of the draw we have two national struggles – the Chinese Yu Yangyi vs. Ding Liren and the Russian Daniil Dubov vs. Sergey Karjakin:

The knockout uses a new system for chess, with up to three days of action in each match. Each day they play a mini-match of four rapid games, with Armageddon if the score ends 2:2. The winner is the first player to win two such mini-matches. The action is also split so no more than two games will be in progress at any time. On Saturday we have the first day of Nakamura-Aronian and Yu Yangyi-Ding Liren, while on Sunday it’s Carlsen-So and Dubov-Karjakin.

Before that, however, there’s a rest day on Friday, but that doesn’t mean a complete break from chess. At 15:30 CEST we’ve got a Banter Blitz with one of the most brilliant and popular players in chess, Levon Aronian:

That will be in English, while you might also want to play Ding Liren (he’ll play and talk in Chinese at 14:00 CEST) and Daniil Dubov (Russian at 17:00 CEST).