Kira Lewis, of Hazel Greene, is named the 6A Player of the Year during the annual Alabama Sport Writers Association Mr. and Miss Basketball Banquet in Montgomery, Ala. on Tuesday April 10, 2018.(Photo: Mickey Welsh / Advertiser)

With April’s evaluation period in the books, 2019 priorities for college basketball teams around the country are becoming more and more clear.

Based on what the Register is hearing from recruiting contacts and industry sources, as well as taking team needs into consideration, here is the newest version of Iowa State’s basketball recruiting big board.

Lots of guards in here, as the Cyclones have made the backcourt their big-time priority for 2019. Although they also would like to add an athletic forward or wing.

Iowa State will likely try to land four players in its 2019 class, even if Lindell Wigginton stays in Ames next year. It is no longer in the running for D.J. Carton, who recently named a top six of Iowa, Ohio State, Michigan, Indiana, Marquette and Xavier.

A lack of clarity with Wigginton’s future kept Iowa State from going all-in on 2019 point guards until recently. Now that it seems more likely Wigginton would leave after next year should he return, the Cyclones can pursue 2019 point guards full-tilt. Expect a strong recruitment of Terry from Steve Prohm and company, who love the Midwest star’s length, bulldog mentality and play-making ability. Terry, whose stock is exploding this offseason, hosted Iowa State for a visit in mid-April — a few weeks before the Cyclones offered May 7.

Lewis is blowing up right now. Kansas is his most recent offer, but he’s also received new offers from Oregon, Northwestern, UConn, Clemson, Indiana and Pitt, and Alabama is all over him. Lewis hosted Iowa State for an in-home visit in April. It will try its best to stay in the hunt for the South’s rapidly rising point guard.

McKinney has been at or near the top of Iowa State’s board for a long time. He’s an explosive combo guard who would work well with any of the point guards on this list. The Cyclones had an in-home visit with McKinney in April. As much as Missouri is considered the favorite, Iowa State is in this race, too. 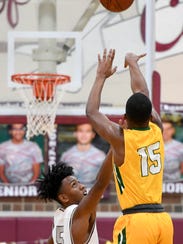 Prohm has had his eye on Tandy since his sophomore year, and he’s recently impressed Tandy with his level of interest. He’s another guy Iowa State had in in-home visit with this April. Tennessee, Kansas State and Cincinnati are also showing healthy interest.

Iowa State has been in on Anderson since August, when it became his first high-major offer. Other schools, such as Georgia and Florida State, have offered since. But the Cyclones are well-positioned here. Their interest hasn’t wavered.

Wahl, who plays with Terry on D1Minnesota, has blossomed into a high-major prospect with a strong offseason. He’s hauled in offers from Drake, Wisconsin, Minnesota, Iowa State and Butler since April 22. His shot needs some work, but the Cyclones love his length and play-making ability. On paper, he looks like a power forward, but he plays nimbly like a wing. He could see more high-major offers come his way this summer.

Iowa State is gaining good traction with Williamson lately and a summer visit could be in the cards. Rivals loves this kid; it ranks him top-50 in the class. Williamson would be a nice third guard to go along with a point guard and a combo guard for the 2019 backcourt class.

Of course, Iowa State would love to get Liddell, the reigning Mr. Illinois Basketball. But the Cyclones are fading from the picture here.

Iowa State loved what it saw from Hall last month and offered him April 24. It’s getting into this race later than some of the other contenders, including Kansas, who many consider to be the favorite. The Cyclones will try to wedge themselves in here.

Iowa State hasn’t offered, but Hargrove is on the Cyclones’ board and they will continue to evaluate him this offseason. Assistant coach Daniyal Robinson watched Hargrove in February during the same trip in which he watched Liddell and McKinney. An athletic, scoring-machine small forward.