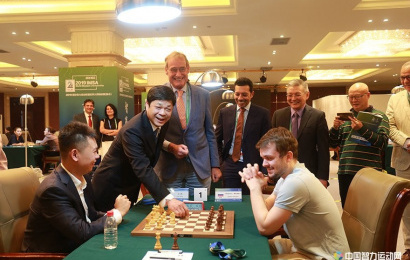 Leinier Dominguez and Vladimir Fedoseev were the early
leaders as the International Mind Sports Association World Masters began in
Hengshui, China on Tuesday. Gata Kamsky and Jovanka Houska will commentate live
on five days of rapid and blitz chess, with 16 player fields for both the open
and women’s sections. Mariya Muzychuk, Valentina Gunina, Nana Dzagnidze and
Zhansaya Abdumalik were the fastest starters in the women’s event.

Hengshui, 300 km South of Beijing, is the venue for the
inaugural IMSA World Masters:

The event is a continuation of the earlier IMSA Elite Mind
Games events that featured parallel tournaments in bridge, chess, draughts, Go
and Xiangqi (Chinese chess), with a total of 170 players from 36 countries
competing across 17 different disciplines. For chess this year that means rapid
and blitz, since the experiment with Basque chess (two players playing two games
at the same time) has been discontinued. The prize fund for each tournament in the open section is
75,000 euros, with 18,000 for 1st place, while in the women’s section it’s 50,000 and
12,000 respectively.

The chess tournament features 16 players in each section,
and while all the players are household names the level is a little lower than
in previous events. In 2017, for instance, we had the world nos 3 (Mamedyarov),
10 (Ding Liren) and 11 (Alexander Grischuk), while this year the highest
classically rated players are no. 17 Leinier Dominguez and no. 19 Yu Yangyi.
The explanation is simple – the incredibly packed chess schedule this year made
the event impossible for all those playing either in the Abidjan Grand Chess
Tour or the FIDE Grand Prix (starting Friday). It also excludes a player who
has a semi-professional interest in draughts – Vassily Ivanchuk!

The eccentric Ukrainian is a regular at the IMSA
events, but this year he found himself back in Havana, Cuba instead for the Capablanca
Memorial. The 50-year-old didn’t let his fans down, since a last-round win over
Adhiban gave him an 8th title! (replay all the games here)

Sam Sevian and David Anton finished half a point back, with
Anton coming incredibly close – if he’d converted an extra pawn in the final
game he would have taken the title with better tiebreaks.

Chucky will be missed, but the spectator experience has been
improved this year with some top notch English commentary from US Grandmaster
Gata Kamsky and English IM Jovanka Houska – there are far worse ways you could
spend your mornings (games start at 14:00 local time, or 8:00 CEST):

All the games are being broadcast live, with the first three
days consisting of 11 rounds of rapid chess at a time control of 15 minutes for
all moves and a 10-second increment from move 1. You can watch and replay all
the open section games using the selector below:

The leaders after the first day were Leinier Dominguez and
Vladimir Fedoseev, who both scored 3/4. Dominguez is one of the men of the
moment, as after two years without classical events he’s come back with an understandable hunger – he’s now world no. 12 on the live rating list after top
performances in the US Championship and the Russian Team Championship.

He did
play speed chess during that hiatus, and seems to have forgotten nothing, even
if he needed to turn most of his games around at some point on the first day.
For instance, it looked as though Boris Gelfand was the player on top here, chasing away the rook on c7…

But after 16…Ncb4! it was Dominguez who took over!

Vladimir Fedoseev shot to prominence in 2017 but has failed
to build on that since and has currently slumped to a 2680 rating. He looked on
top form in Hengshui, however, winning a bold attacking game against Bu
Xiangzhi, a nice technical endgame against Vidit and missing out on more in the
first game against Wang Hao:

If Black can exchange heavy pieces the b3-pawn will win the game, and 52…Rd5! would have left Fedoseev with an overwhelming position. Instead he played 52…b3?, allowing the Chinese star to go for his one chance of
counterplay with 53.h5! Black might still have won after 53…Rc8, but the safer 53…Qg4+
soon led to a picturesque pawn structure – seldom have two extra pawns been
less significant!

The lowest rapid rated player (2622) in the field is Gawain
Jones, though after his TePe Sigeman Chess triumph the English grandmaster is
now up to 2709.2 on the classical rating list and fully deserving of a chance
to play in this kind of event. He drew two with Black and lost two with the
white pieces, but he gains bonus points for tweeting from China!

One position that deserves a mention is from the heavyweight
clash Andreikin-Gelfand:

Gata Kamsky, analysing without a computer, thought the plan
of this whole line was 26…d5!, with the devastating threat of 27…Ra6#, but Gelfand took
just 7 seconds to play the 2nd best move in the position: 26…Re2? The favour
was returned, however, since instead of the winning 27.Qc1! (the king can hide
from checks behind the queen on b2) Andreikin went for 27.Qf5?, when Boris
forced perpetual check.

The standings after Day 1 looked as follows:

In the women’s section, meanwhile, there are four leaders, including
the youngest player in the tournament, 19-year-old Zhansaya Abdumalik. The
Kazakhstan player beat Irina Krush and Tan Zhongyi and drew with Humpy Koneru
and Mariya Muzychuk.

You can replay all the games below: