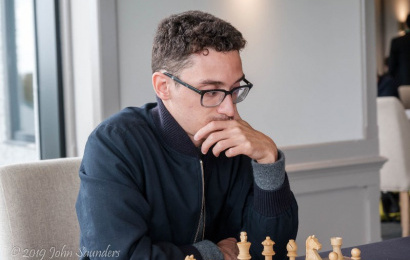 Fabiano Caruana beat Sam Sevian in Round 2 to join Adhiban, Wang Hao, Bu Xiangzhi and Alexei Shirov in the FIDE Chess.com Grand Swiss lead on 2/2. It’s almost unheard of for just five players to lead after two rounds of such an event, but as we’ve seen, this is no ordinary Swiss open. Magnus Carlsen was among those to struggle after 19-year-old Alexey Sarana blitzed out 24 moves of home preparation. Half of the upset wins were for female players, with Batkhuyag Munguntuul, Antoaneta Stefanova, Marie Sebag and Elina Danielian all beating higher rated male opposition.

You can replay all the games and check out all the pairings from the FIDE Chess.com Grand Swiss on the Isle of Man using the selector below:

19-year-old Russian Grandmaster Alexei Sarana explained that his main plan before facing Magnus Carlsen in Round 2 had been to get a good night’s sleep, but while that may have helped it also did no harm to have correctly guessed the first 24 moves of the game! Magnus stuck to his World Championship preparation by meeting 1.e4 with the Sveshnikov Sicilian, but with the old main line 7.Bg5 Sarana deviated from the 7.Nd5 that dominated the London match.

He then deviated with 9.Bxf6 from the approach Dominguez, So, Giri and Radjabov had all tried against Magnus this year, before with 15.Qh5 Sarana varied from his own 15.Qf3 against Carlsen’s second Daniil Dubov in the 2018 Russian Championship:

Magnus had had this position himself three times back when he was Sarana’s age, but he’d always chosen 15…Rb8. This time he opted for 15…d5, a move Evgeny Vorobiov had recently used to score a quick win over Carlsen’s compatriot Aryan Tari. Sarana didn’t blink, however, and both players continued to blitz out their moves until we’d reach a highly simplified ending. The young Russian later said he’d looked at the position with a computer up to 24.g3 and had seen that it was good:

It still felt as though the game would merely fizzle out into a quick draw, but by the time 33.g4! (rejecting a repetition) appeared on the board it was clear that Black was having no fun at all:

After 38.f4 the situation was critical:

By this stage Carlsen’s 38…h6! was an only move, while after 39.Ng4 he spent 17 minutes to come up with a somewhat Baroque but highly effective way to draw the game: 39…Ba3! 40.Nxh6 Be7! (the mental flexibility to find this kind of “pendulum” move is one of the features of Carlsen’s play that Artur Jussupow identified in his chess24 video series) 41.Rd7 Bxg5! 42.Nxf7 Rb2+! 43.Kf3 Bxf4! and Magnus was able to reach the easily drawn Rook vs. Rook + Knight ending. It had been a rare perfectly played but still interesting game of chess:

In total there were only 6 wins on the top 20 boards, with Fabiano Caruana the one pre-tournament favourite to claim a second win in a row. He once again took his time but was utterly convincing as he despatched young compatriot Sam Sevian, whose attempts to escape with stalemate at the end were never going to work against the world no. 2.

In Round 3 Fabiano has Black against Alexei Shirov, who followed his win over Alina Kashlinskaya by beating Erwin l’Ami with the French Defence. Something went wrong very early on for Erwin, and when he tried to expand on the kingside he only set up a nice tactic for Alexei (21…Nxe5!), though the most aesthetically pleasing trick would come later: 36…Ba4! and the bishop couldn’t be taken without the b-pawn queening. It wasn’t quite the famous 47…Bh3!! from Topalov-Shirov, Linares 1998, but that game did cross Erwin’s mind:

The other leaders are Bu Xiangzhi, who suddenly whipped up a mating attack against Alexander Riazantsev, Wang Hao, who outplayed Rauf Mamedov with the black pieces, and Indian firebrand Adhiban, who exploited a middlegame mistake by 18-year-old Jeffery Xiong in brutal style.

Stars such as Wesley So, Levon Aronian and Sergey Karjakin were held to second draws in a row, with 13-year-old Indian IM Raunak Sadhwani following up his win over one strong Russian grandmaster by effortlessly drawing with the black pieces against Karjakin.

Another Indian prodigy, Nihal Sarin, had a tough day at the office, as Boris Gelfand demonstrated the power of the bishop pair. In the final position Nihal can finally eliminate the minor pieces, but the pawn ending is a trivial win for Black.

51-year-old Gelfand’s reward is not to play a youngster but 47-year-old Vladimir Akopian in Round 3!

While it may have been tight at the top some star players flexed their muscles on the middle boards, with Radek Wojtaszek, Hikaru Nakamura, Peter Svidler and Maxim Matlakov competing to bamboozle their opponents with the white pieces.

Wojtaszek in particular was pleased with the nice finish to his game after 40.Be4! Rc8:

There was also a thumping win for Vishy Anand over Tal Baron all the way down on board 62, but the prize for the most spectacular win of the day goes to Eltaj Safarli, who caught higher-rated Maxim Rodshtein in the supposedly quiet Exchange Variation of the Caro-Kann. It turned out that 20…Kg7? was a losing blunder, with Eltaj quickly playing the winning 21.Qh3!

A fun game to try out the variations with on our site (simply make your own moves on the board).

The day’s other story was that after many of the women on the lower boards came close to surprise wins in the first round, four of them actually did win in Round 2. Gawain Jones seemed to overlook back rank issues when he went for an exchange sac against former Women’s World Champion Antoaneta Stefanova, and when she gave back the exchange for positional dominance there was no way for Gawain to avoid a second loss in a row.

Zhang Zhong, who played Caruana the day before, blundered in time trouble against Marie Sebag, as did Sethuraman against Elina Danielian, with 36.Qe3? (36.Qc3!):

Elina’s 36…Ne4! wins the white queen, since the knight covers the d2 escape square and 37.Qxb6 Ra1# is mate. Sethuraman stumbled on with 37.Qa3 but resigned before the time control.

Perhaps the most impressive win came for Mongolia’s Batkhuyag Munguntuul, who outplayed Sergei Movsesian in a complicated middlegame that only heated up after move 60, with resignation coming on move 83. The last game of the day to finish was Peter Leko’s draw with Avital Boruchovsky, where Peter missed a win deep into the 7th hour of play.

In Saturday’s Round 3 we’ve already mentioned Shirov-Caruana, while Caruana’s coach Rustam Kasimdzhanov will need all their World Championship preparation when he marshals the black pieces against Magnus Carlsen. Tune into all the live action here on chess24 from 16:00 CEST!