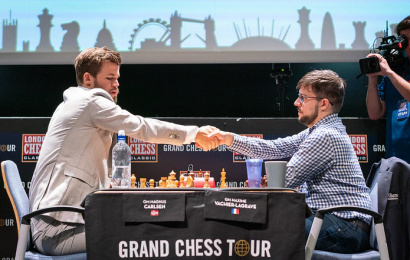 “It seems he’s not in his best physical shape, but I’m not in my best playing shape!” summed up Ding Liren after Levon Aronian surprised him with a draw offer in a position where the Armenian no. 1 would surely have played on if he wasn’t feeling unwell. The balance also wasn’t upset in the other match, where Magnus Carlsen again got a good initiative out of the opening but this time saw nothing better than to force a draw. The players now play two rapid games and up to four blitz games on Wednesday, with the stakes high – the finalists are guaranteed at least $100,000.

You can replay all the Grand Chess Tour Finals games using the selector below:

And here’s the day’s live commentary:

After the excitement of the first game in this match we could perhaps have predicted something quieter in the second – no-one wants to go into the rapid and blitz with the gaping 6-point deficit you incur for losing a classical game.

Another day at the office

Nevertheless, the opening battle was again sharp – Magnus sprung a surprise by playing the rare 7…Be7 he’d tried in an exciting clash with Fabiano Caruana in Norway Chess earlier this year. The parting of ways only came on move 11:

In Norway Fabiano went for 11.Nc3, while in the 2018 Olympiad Levon Aronian played 11.Qe1 against Shakhriyar Mameydarov, though Maxime saw that as a cautionary tale:

I got surprised in the opening and I couldn’t figure out what to do, because a year ago I wouldn’t have maybe been cautious, but I remember Levon lost very badly against Mamedyarov and you get sort of Marshall compensation and it’s actually very tough to play on the board if you don’t remember your analysis.

So Maxime opted for 11.b3, just as Hikaru Nakamura had against Caruana in the recent Sinquefield Cup. Magnus commented:

b3 is sort of the safe way to play here, and I think I got very easy play after 16…Qc6. He thought for a long time, and basically his mind-set here was that he should try and equalise, since even though his structure is better the knight on a3 is so bad that there isn’t really anything to hope for for him.

This is the position where Maxime spent 17 minutes:

“I didn’t expect a free ride like Magnus did with 21…Qd7, after which it’s just petering out to a draw,” said Maxime, who responded with 22.d5! followed by mass exchanges that eventually led to only bare kings being left on the board on move 43. 21…Qb7 would have posed more questions, but Magnus seemingly correctly pointed out that after 22.Na5 Qb6 the move 23.Qc3! solves all White’s issues.

What can we expect from the rapid and blitz? Maxime commented:

It’s going to be a tough fight tomorrow, but I hope I can play my trumps, because I think it will be vital to not get out-prepared like I did today, so I will need to be more ready for his openings… and then I think it can be a fair fight!

Magnus agreed it will be tough:

Yes, he’s a very good rapid and blitz player, obviously – it’s one of the reasons he’s made it here two years in a row.

The other semi-final currently looks just as unpredictable:

Peter Svidler pointed out that it was with the black pieces that Levon Aronian had Ding Liren on the ropes in the 2017 World Cup final, and again it was with Black that he managed to pose problems here. Ding proved unprepared for the move 9…Bg4, though around 80 games had been played in the position:

The Chinese no. 1 was uncomfortable with the pin of the f3-knight and confessed:

I don’t know how to continue and I think my play was very unnatural and it turned out to be very bad.

After the exchange of rooks my position is also worse, but not that bad.

There was still time for Levon to pull off one last surprise – offering a draw as he played 28…Rh8:

Of course he’s better and he has many ways to continue. I don’t know why he didn’t play. He said he feels not good… so it’s a very badly played game. It seems he’s not in his best physical shape but I’m not in my best playing shape!

That’s going to make the rapid and blitz intriguing, with both players needing to recover fast.

There were also two draws in the British Knockout Championships, meaning David Howell retains a 6-point lead over Gawain Jones after winning their first game, while 20-year-old Aravindh, 18-year-old Anton Smirnov and 14-year Praggnanandhaa all won in Round 6 of the FIDE Open to share the lead on 5.5/6. That’s yet another feather in the cap of one of the world’s best coaches!

Tune in to all the Grand Chess Tour Finals action from London from 17:00 CET each day here on chess24!