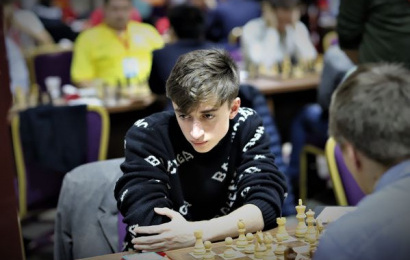 Dmitry Andreikin’s win over Vassily Ivanchuk made Russia the sole leaders after Round 6 of the European Team Championship, while Liviu-Dieter Nisipeanu beat Nikita Vitiugov as Germany held the favourites to a draw in Round 7, but the star of the show has been Daniil Dubov. The 23-year-old grandmaster is springing original opening ideas in every game and in Round 7 he won a stunning encounter with Rasmus Svane.

We got a sole leader for the first time in the open section of the European Team Championship in Batumi when Russia beat Ukraine in Round 6. There were three draws on the bottom boards, while Dmitry Andreikin continued to lead by example with a win over the great Vassily Ivanchuk:

And soon, without anything spectacular happening, White was in complete control:

Vassily decided the threats on the kingside were so dangerous that he had to give up a pawn to exchange queens with 29…Qb6 30.Qxd6 Qc5, but the exchange of queens did little to reduce White’s advantage as Dmitry went on to win in 56 moves.

The game that captivated the audience from the beginning, though, came from Daniil Dubov, who had announced his presence in Batumi with what he called a “ground-breaking” novelty in the Anti-Marshall in Round 1. He was also having a fantastic event…

…and in Round 6 he bamboozled Alexander Moiseenko with 6…h5 in the Grünfeld, a very rare idea that’s been championed by Polish Grandmaster Jacek Tomczak:

It was a novelty for Moiseenko, who was interviewed afterwards and revealed how he spent the 37 minutes he took on his next move:

The most logical was 7.Ne4 dxe4 8.h4, but then Black has a very strong move 8…e5, with the idea to check on b4. I should play 9.a3 and then I was thinking maybe it’s equal, but after 9…exd4 10.Be5 there’s also the move 10…Rh6 and I can’t take with the bishop [11.Bxd4? runs into 11…Rd6!], I should play 11.Qxd4 and 11…Qe7. It looks very dangerous for me, and with preparation it can be any evaluation, so I’m not sure what I played was the best, maybe not the best, but at least it was out of preparation, it was a game and not playing against computer preparation!

After 7.f3!? Dubov immediately thought for 18 minutes on 7…h4, and though the game ended up being short in terms of moves there was time for a sacrifice!

That was nothing compared to the next game against Rasmus Svane, which went some way to justifying Gata Kamsky’s comment in a recent interview with Conrad Schormann that, “Dubov, for example, reminds me of Tal”. This time it seems Dubov was playing more by feel than preparation when he castled queenside and gave up a pawn, since if he had prepared the wild position that followed he could have made a beautiful piece sacrifice:

Black has just captured a bishop on f4 and Dubov restored material equality, give or take a couple of pawns, with 16.Bxc6, when in fact he could have played 16.gxf4!! The point is that with a rock-solid centre White can double or potentially triple on the h-file and there’s not so much Black can do about the coming storm.

When computer evaluations then began to swing in Black’s favour it seemed Dubov might have spoilt a great position – not only that, but with Nikita Vitiugov getting crushed by Liviu-Dieter Nisipeanu on top board Dubov’s failure might cost his team dear. We needn’t have worried, however, since Dubov was only getting started!

22.Rxf7! Rxf7 (initially computers suggest 22…Nc3+!!? is better for Black, but deeper analysis suggests it’s probably equal) 23.Qxg6+ Kf8 and the black king’s odyssey had begun! On move 29 Daniil, down to 4 minutes on his clock, could have taken a draw by repetition, but instead he went for 29.Be6+!

That game overshadowed the action on the other boards, but Nisipeanu made no mistake as he went on to beat Vitiugov in 53 moves and draw the match.

Germany, who had defeated Azerbaijan in the previous round, are the only team other than Russia who remain unbeaten in Batumi.

They trail Russia by one point, as do Ukraine and England:

2nd seeds England are gathering pace at just the right moment. In Round 6 Luke McShane and Gawain Jones both won with Black to defeat Croatia, while in Round 7 another win for Gawain Jones gave England a win over team chess pros Armenia.

In the women’s section Russia lead Georgia by a full two points after following dropping their first match point against Azerbaijan by crushing 4th seeds Poland 4:0. Azerbaijan proved just as tough competition for Georgia, who they also held to a draw. Russia’s next opponents Armenia are level with Azerbaijan and Ukraine, three points behind Russia.

The big clash in Friday’s penultimate round sees top seeds Russia take on 2nd seeds England in the open section, and you can follow all the action here on chess24 from 12:15 CET! Open | Women