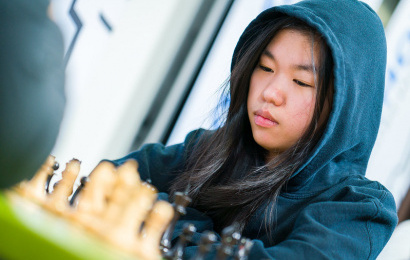 Women’s World Champion Ju Wenjun and former World Champion Alexandra Kosteniuk lead the 2020 Cairns Cup on the rest day after defeating Kateryna Lagno and Mariya Muzychuk respectively in Round 5. Previous leader Nana Dzagnidze was outplayed by Humpy Koneru, Valentina Gunina’s pawns steamrollered Harika Dronavalli and 16-year-old Carissa Yip completed a day of all decisive games by finally getting off the mark with a win over Irina Krush.

You can replay all the games from the 2020 Cairns Cup using the selector below – click on a result to open that game with computer analysis:

Sometimes players take things easy before a rest day as they’re tired and don’t want to spoil their mood for the next couple of days, but no-one was holding anything back in Saint Louis on Tuesday!

It was a day when all that mattered was the last mistake, with the evaluation swinging wildly on most boards. For instance, Ju Wenjun was all but busted when she grabbed the c3-pawn and ran into the brilliant 12.d5! from Kateryna Lagno:

After 12…exd5 Kateryna could have kept the black king stranded in the centre of the board with 13.Rc1!, 13.Bd4 or other moves that retained the tension, but instead she spent 27 minutes on 13.Qxd5?! Nge7! 14.Qb5 0-0, allowing Black to castle with tempo. The game was still in the balance, but ultimately it was Lagno’s king that became a target in the middle of the board. 41…Rg1! was a devilish move:

“Fortunately for me my opponent didn’t show what I missed several times in the game and I was able to create this positional masterpiece,” said Alexandra Kosteniuk afterwards, and she was right that mistakes were made. She called it a “terrible move” to put her knight on the rim on move 20 instead of on c5, while 24.f3? should have left White fighting for survival:

24…Re2! was the move, with the hidden threat of Bh3 next, when capturing the bishop would lead to a quick mate. Instead after 24…Rae8 25.Nc6 R5e6 26.Nd4 the knight was finally where it needed to be and Alexandra did go on to win brilliantly. Arbiter Chris Bird intervened to point out Mariya had lost on time trying to make her 40th move, but the position, with both white rooks on the 7th rank, was absolutely hopeless in any case:

Alexandra repeated her mantra that to be in the Top 10 you need to lose less games than she’s been losing recently, but that’s now three wins in the last four games!

Those wins took Ju Wenjun and Alexandra Kosteniuk into the lead since the sole leader going into the round, Nana Dzagnidze, lost a long and complicated struggle against Humpy Koneru. There were too many twists to summarise, with Nana still having chances to rescue a draw until the final stages, but perhaps the clearest chance to alter the course of the game was after 22…Ne4?!:

Valentina Gunina has guaranteed entertainment in this year’s Cairns Cup, and her Round 5 game was no exception. After spending 2am to 6am trying to get to sleep, she commented, “I wanted to play fast and not to fall asleep at my board!”

She met her opponent’s Sicilian with a closed system (1.e4 c5 2.Nc3 Nc6 3.g3) but it still developed into a game of attacking on opposite sides of the board, with Valentina’s kingside pawn storm soon looking unstoppable. So it proved, with the final touches coming after 32.h7+! Kxh7 had bulldozed open the black king position:

Last, but by no means least, 16-year-old Carissa Yip finally got off the mark with a win after starting the tournament with four losses. She commented afterwards, “It feels great – it’s been a while, you know!” Carissa admitted that she’d been “very intimidated” by the players she’d faced in the earlier rounds, while although Irina Krush is also a formidable player she was one the youngster had the experience of beating before in the US Championship.

The game was anything but smooth, with Carissa confessing it had been “greedy” to pick up a pawn in the opening, as Irina got a powerful initiative in return. The 7-time US Champion’s play has been somewhat shaky in St. Louis as well, however, and she first released the tension and then slipped to defeat after playing the pawn grab 36.Qxe5?! with only 16 seconds left on her clock:

Irina had made the time control, but there was nothing to do. After 41.Qa4 Rxd1! 42.Qxd1 f2 the f-pawn couldn’t be stopped, and when the checks ran out a very relieved Carissa Yip had picked up a full point.

The players now get a well-deserved rest day, with the standings with four rounds to go looking as follows:

Carissa has White against Valentina Gunina in Thursday’s Round 6, while Koneru-Kosteniuk and Ju Wenjun-Harika are the games of the leaders. Don’t miss all the action live here on chess24 from 20:00 CET!